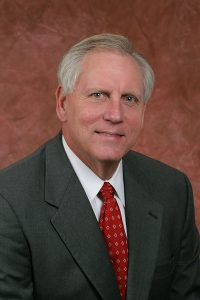 During the tenure of T.K. Wetherell, the first alumnus to become president, The Florida State University enrolled the most academically talented students in the history of the university, increased the number of doctoral degrees awarded, set new records for research dollars and experienced a boom in campus construction.

Wetherell brought the Applied Superconductivity Center to campus from the University of Wisconsin in Madison, where it had been housed for more than two decades. The center has become the material research division of the National High Magnetic Field Laboratory.

A career educator who served in the Florida House of Representatives from 1980-92, including two years as Speaker, Wetherell earned his bachelor’s and master’s degrees as well as a doctorate in education administration from Florida State. He served as president of Tallahassee Community College from 1995 until 2001.

Born Dec. 22, 1945, in Daytona Beach, Wetherell attended Florida State University on a football scholarship and played on the 1963-67 football teams. On his retirement from the presidency, Wetherell became a tenured professor in the College of Education and President Emeritus.

Virginia Bacon (b. 1947) was born in Anniston, Alabama, and earned a bachelor’s degree from Auburn University and a master’s degree from Jacksonville State University. She also studied at the Kennedy School of Government, Harvard University. She and T.K. Wetherell married in 1988. Prior to entering public service she had a successful business career. In 1982, she was the first woman elected to the Florida House of Representatives from Pensacola. In 1991, she was named Executive Director of the Department of Natural Resources, the first woman to ever hold that position. In 1993, she was appointed as Secretary of the Department of Environmental Regulation and was later appointed Secretary of the newly created Department of Environmental Protection, where she served until 1998. Since then, she has been president of Wetherell Consulting, Inc., providing governmental consulting and lobbying services before executive agencies, the legislature and the Florida Cabinet. A gifted designer and decorator with boundless energy, a keen eye for detail and execution, and top-level management skills, she served as the guiding force for the development, construction and furnishing of the privately funded new President’s House. She envisioned the house, which opened its doors in 2007 filled with symbols of the University’s heritage, as a place that would be elegant and efficient for entertaining large groups of students, faculty and staff and also comfortable for the first family as a private home. In the words of this warm and gracious hostess, “I wanted this house to feel like it’s always been here — to feel like the University grew up around it.”