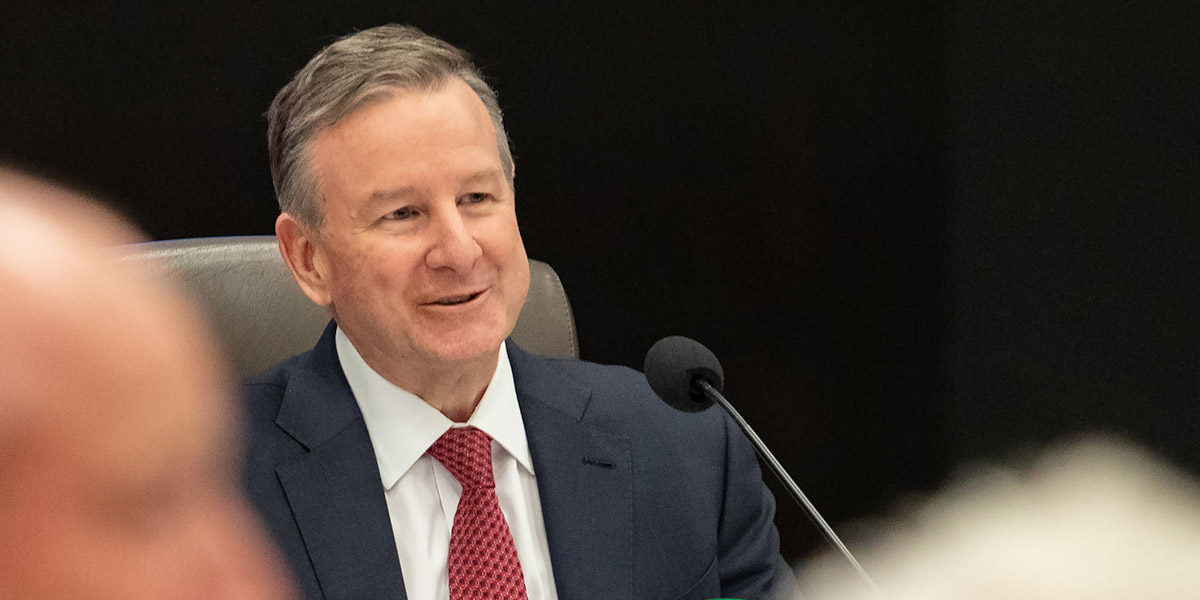 Florida State University President Richard McCullough will deliver the State of the University address at 3:05 p.m. Wednesday, Jan. 19, during a meeting of the Faculty Senate. The address will be webcast live.

Richard McCullough became the 16th president of Florida State University on Aug. 16, 2021, bringing more than 30 years of academic research and leadership experience to the role as well as a commitment to innovation, entrepreneurship, and diversity, equity and inclusion.

Prior to joining FSU, McCullough had served as vice provost for research and professor of materials science and engineering at Harvard University since 2012. In this role, he oversaw the development, review and implementation of strategies, planning, and policies related to academic research. In addition, he led an office of Foundation and Corporate Engagement and assisted in the oversight of more than 25 interdisciplinary institutes, centers and initiatives across the university.

During his tenure, McCullough successfully built and launched the new Harvard Data Science Initiative, a collaboration between 12 of the university’s schools and more than 120 faculty, which led to the creation of three new master’s programs and many new undergraduate courses.

McCullough developed and launched a new structural biology program and cryo-electron microscope facility that partners Harvard Medical School with three Boston-area hospitals. He also led the development of a new $100 million, multi-institution collaboration to build the Advanced Biological Innovation and Manufacturing Center and Facility, which will be a hub for medical research and education, as well as economic and workforce development.

Previously, McCullough spent 22 years at Carnegie Mellon University in Pittsburgh, where he began his academic career as an assistant professor of chemistry in 1990 and became the Thomas Lord Professor of Chemistry in 2009. He was promoted to head of the chemistry department in 1998 and then served as dean of the Mellon College of Science from 2001 to 2007 before becoming the university’s vice president for research.

McCullough, who holds multiple patents and is the founder of two companies, has a rich background in entrepreneurship and innovation. At Carnegie Mellon, he developed a vibrant innovation ecosystem, including the Greenlighting Start-ups Initiative that exponentially increased the generation of university spin-out companies and corporate engagement. In 2013, he was elected a fellow of the National Academy of Inventors.

A staunch champion of diversity, McCullough created a diverse pipeline of Black/African American, Laxtinx and other underrepresented minority academics from both his research lab and as the founding creator of the Future Faculty Workshop: Diverse Leaders of Tomorrow, an annual workshop that helps diverse postdoctoral fellows and students obtain academic jobs. Now in its 15th year, the workshop has facilitated placing more than 50 underrepresented minority professors in the United States.

McCullough is the author of numerous peer-reviewed articles and serves on the editorial boards of several academic journals, including Advanced Materials. He has been an innovation, entrepreneurship, and technology transfer advisor to Oxford University, Princeton University and Washington University at St. Louis.

A first-generation college student from Mesquite, Texas, McCullough attended Eastfield Community College before earning a bachelor’s degree in chemistry from the University of Texas at Dallas in 1982 and a doctoral degree in organic chemistry from Johns Hopkins University in 1988. McCullough also spent two years as a postdoctoral fellow at Columbia University in New York.
He and his wife, Jai Vartikar, have two children, Jason and Dylan, daughter-in-law, Sarah Christian, and two granddaughters, Gladys and Archer.