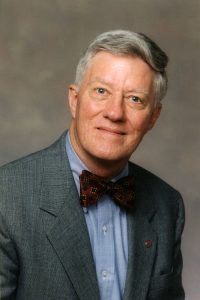 Talbot “Sandy” D’Alemberte, served as president of The Florida State University from 1994 to 2003. Prior to his presidency he was dean of the College of Law, and he continued his service to the university after his presidency.

Throughout his tenure as president he was dedicated to academic excellence and research, intellectual freedom, diversity, heritage and historic preservation, support for the arts and culture, championship athletics, civic responsibility and service, international programs and campus beautification. He was known for his integrity, broad vision and human warmth.

Under his leadership The Florida State University College of Medicine was established and accredited and the university became headquarters of the National High Magnetic Field Laboratory, the largest and high-powered facility of its sort in the world. The university also acquired The John and Mable Ringling Museum of Art and established the Seven Days of Opening Nights festival of the fine and performing arts.

Earlier in D’Alemberte’s career, he served in the Florida House of Representatives. Throughout his life he has been dedicated to public and professional service. He served as President of the American Bar Association and President of the American Judicature Society along with numerous other offices and committee leadership. He has been a champion of pro bono legal service and was in the forefront of the modern dispute resolution movement. He has been honored with the legal profession’s highest awards.

Patsy Palmer (b. 1949) was raised in Missouri. She and Talbot “Sandy” D’Alemberte married in 1989. A former children’s policy coordinator in Florida Gov. Lawton Chiles’ office, she also worked as a journalist, legislative aide and White House staff member. In love with learning throughout her life, she received a bachelor’s degree from the University of Missouri in journalism, a master’s degree from the Harvard Divinity School and a master’s degree in conflict resolution from Antioch University (earned during her time as First Lady). She received her J.D. degree from the College of Law at The Florida State University in May 2007 and practices law in Tallahassee. As a trusted advisor to President D’Alemberte, she cared deeply about the educational and cultural functions of The Florida State University. Her admiration for people who lead lives of accomplishment — people who contribute to others — led her to a special regard for the alumni who attended Florida State College for Women. She came to understand that the high standards of FSCW are the foundation for so much of what makes Florida State great today and she, in turn, was recognized by the Emeritus Alumni organization for her contributions and involvement. The President’s House had deteriorated over the years, and President D’Alemberte and Ms. Palmer moved out of the aging structure, paving the way for its renovation as the Pearl Tyner Alumni Welcome Center and the construction of the new President’s House.