Home / The President / Past Presidents and First Ladies / Stanley Marshall 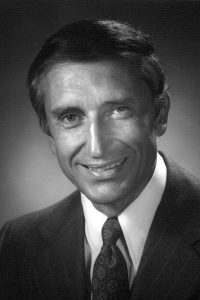 J. Stanley Marshall came to The Florida State University in 1958 from the State University of New York at Cortland, where he held a professorship in physics. His first assignment was to establish a department of science education and to design programs to educate secondary school teachers in the sciences.

He consulted widely in science education, principally in the Middle East and was recognized nationally and internationally for his accomplishments, including the elite designation as a Fellow of the American Association for the Advancement of Science.

Marshall served as dean of the School of Education and executive vice president before his appointment as president. His presidency coincided with a period of radical student protests, and his campus leadership was most notable for advancing racial integration.

Following his presidency he remained active in higher education, including service on the Florida State University Board of Trustees and the Florida Board of Governors. He died in 2014.

Shirley Ann Slade (b. 1932) was raised in Gladewater, Texas, and attended the University of Houston and Laval University in Quebec City, Canada. She worked for J.H. Whitney and Co. in New York City and then for Pan American World Airways, where she advanced from stewardess to purser to management supervisor. She and Stanley Marshall married in 1966. With five children–one of whom, Drew, was born during the Marshalls’ time in the President’s House (now the Pearl Tyner Alumni Welcome Center)–family activities included tennis, baseball, touch football and swimming. The Marshalls enjoyed entertaining and may have set a record for the number of events they hosted at the house, which included visits by the Italian ambassador, actress Helen Hayes, King Hussein of Jordan and noted athletes. Easter egg hunts for the children of faculty and staff were an annual event. During the Marshall years a swimming pool and tennis courts were added to the facilities. As they moved into the President’s House, the Marshalls were confronted by the campus unrest of the “tumultuous sixties.” The situation had calmed by the end of their tenure.