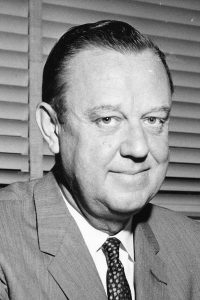 Robert Strozier became president of The Florida State University in 1957, after 28 years of college teaching and administration in three Georgia institutions. He had also served as dean of students and professor of romance languages at the University of Chicago. He was known for his excellent academic credentials, combined with a level-headed practicality and a winning personality.

Soon after coming to Florida State, Strozier announced this ambition: “We shall make Florida State a great university,” and took steps toward this goal. Students appreciated him for his ready wit, and he established a great rapport with the faculty.

While in Chicago for a speaking engagement, Dr. Strozier suffered a heart attack and died on April 20, 1960, at age 53. The university’s main library is named for him.

Margaret Burnett (1911 – 2008), who was born in Boulder, Colo., dreamed of becoming a doctor like her father. Instead she earned a bachelor’s degree in English literature from the University of Colorado. After trying her hand at teaching, she returned to school, this time at the University of Chicago, to earn a master’s degree in medical social work. It was there that she met her husband. When Mrs. Strozier arrived at Florida State in 1957, she immediately began working on the President’s House (now the Pearl Tyner Alumni Welcome Center). Using her love for music, books and the arts as inspiration, Mrs. Strozier completely transformed the house with a blend of modern and traditional art styles. While serving as First Lady, she enjoyed touring the state with her husband on “get acquainted” trips. She hosted small tea parties for her fellow Florida State wives, but her main focus was her family, which included a daughter, two sons, a step-son and step-daughter. After her husband’s death in 1960, she returned to Chicago to become director of admissions for the University of Chicago’s School of Social Service Administration, later serving as its Dean of Students and Director of Alumni Affairs.