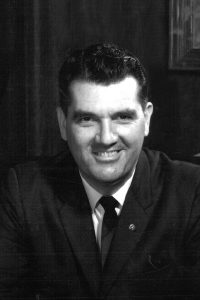 John Champion was president of The Florida State University from 1965 to 1969. During his presidency, the law school opened, the university’s first international study center (Florence, Italy) was created, construction was begun on the Fine Arts Building, and Florida State was named one of 30 Centers of Excellence by the National Science Foundation.

Champion inaugurated the university’s Artist Series and the President’s Awards for Excellence in Undergraduate Teaching. He established the school’s Program in Medical Sciences, the forerunner of today’s College of Medicine, and was an advocate of campus beautification.

Champion presented the diploma to Florida State’s first black graduate, Maxwell Courtney. Enrollment swelled from 12,000 students to 16,000 students during his tenure, which also endured the tumult of student political protests.

Champion was hired as an accounting professor in 1956, rose to assistant dean and later Florida State University’s first vice president of administration before being tapped as president. After his presidency, he returned to the classroom as a professor in the College of Business, retiring as professor emeritus in 1985. He died in 2002.

Mary Lanier (b. 1931), a graduate of Auburn University who majored in clothing and textiles, married John Champion in 1955. The following year the couple moved to Tallahassee so that John could join the faculty of the College of Business. By the time John became President in 1965, Mrs. Champion was well acquainted with the President’s House (now the Pearl Tyner Alumni Welcome Center). The Champion children, Sally and John, were nine and seven when they moved into the house, and they enjoyed their interactions with students and VIP guests. A Southern lady born in West Point, Georgia, Mrs. Champion brought grace and elegance to Florida State University and loved living in the President’s House, keeping it filled with fresh flowers. She made most of her own clothing, even formal attire, and believed in dressing properly for the role of First Lady. She hosted spring egg hunts and a Halloween party for faculty children and welcomed new graduates at post-ceremony receptions. She acquired chandeliers for the house from Gov. Claude Kirk when the Governor’s Mansion was renovated. She had been a member of Kappa Delta sorority at Auburn and was active in the Kappa Delta Alumnae Association at Florida State. In recognition of her service to the university she was selected for membership in the Garnet Key leadership honorary society.