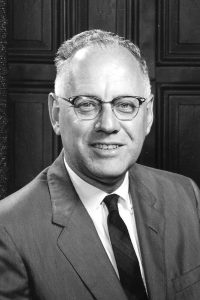 Gordon Blackwell was serving as the chancellor of the Woman’s College of the University of North Carolina when he accepted the presidency of The Florida State University in 1960.

Growth management, academic program development, building construction, and development of a well-rounded athletics program were the major accomplishments of his FSU administration. He played a vital role in the racial integration of the university.

During his presidency, enrollment increased from 9,000 to 12,000 students, funding from research contracts and grants more than doubled to $5.5 million, faculty salaries increased by almost 50 percent and the total budget almost doubled to $30 million.

To augment state funds with private support, Blackwell appointed the first professional director of the Florida State University Foundation. During his administration the School of Engineering was created; the Asolo Theatre Festival was begun; a Division of Sponsored Research was created; and new doctoral and master’s degree programs were approved.

During Blackwell’s administration, $26 million was spent on building program, including new buildings for math-meteorology, physics, molecular biophysics, psychology research, the university student union and a residence hall. Doak Campbell Stadium was enlarged and a football field house was added.

Blackwell left Florida State in 1965 to become president of Furman University. He died in 2004.

A native of Spartansburg, South Carolina, Elizabeth Blair Lyles (1913 – 2000), known as “Lib” to her many friends, was a 1935 graduate of Converse College in North Carolina. She and Gordon Blackwell married in 1937 and had four children, two of whom lived in the President’s House (now the Pearl Tyner Alumni Welcome Center). In addition to Florida State University she served as First Lady of The Women’s College of the University of North Carolina and Furman University. Active on campus and in the community, she joined the Tallahassee Garden Club to learn more about taking care of the 16 acres of grounds and gardens. She called the lawns and gardens “perfectly beautiful” and took great pride and enjoyment in caring for them. President and Mrs. Blackwell celebrated the Yuletide with an official lighting of a large outdoor evergreen on the grounds. With the President’s House reflecting her warmth and outgoing personality, the couple often entertained students and faculty families with garden parties featuring special themes and student hostesses in appropriate theme costumes. She was an honorary member of the Florida State University Dames Club, which, in the ‘60s, was a group of working wives of students. She maintained her many Tallahassee friendships until her death in 2000.