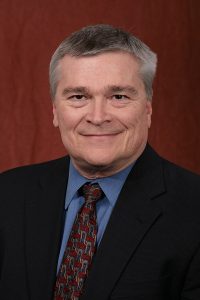 Dr. Barron earned a bachelor’s degree in geology from Florida State as an honors student in 1973. He holds master’s and doctoral degrees from the University of Miami, both in oceanography.

He has been director of the highly prominent national laboratory, the National Center for Atmospheric Research (NCAR) in Boulder, Colo., since 2008.

Prior to taking the position at NCAR, Barron was dean of the newly formed Jackson School of Geosciences at the University of Texas at Austin.

From 1986 to 2006, Dr. Barron was at Pennsylvania State University, where he was professor of geosciences, director of the Earth System Science Center, director of the EMS Environment Institute, and finally dean of the College of Earth and Mineral Sciences.

Dr. Barron is a Fellow in the American Association for the Advancement of Science, the American Geophysical Union, the American Meteorological Society and the Geological Society of America. He has received many national awards as a scholar, researcher and distinguished lecturer, has published extensively and has been editor or a member of the editorial boards of a dozen academic journals.

He has testified before Congress and has chaired numerous committees in service to the federal government, such as the NASA Senior Review for the Earth Sciences in 2005. He has chaired committees and panels of the National Research Council since 1987 and currently chairs “An Ocean Infrastructure for U.S. Ocean Research in 2030.”

A native of Lafayette, Ind., Barron and his wife, Molly, have two grown children.

Molly Barron was born in La Jolla, California, and grew up in Oceanside. She earned a B.A. in education from Central College in Iowa and began her teaching career on Palomar Mountain (home of the Hale Telescope) in a two-room schoolhouse where she taught grades 4 through 8 in a single classroom and served as the on-site principal. During this period, she took graduate courses at Northern Arizona University.

In 1981, she moved to Boulder, Colorado where she married Eric Barron. Both of their children, Emily and James, were born in Boulder. After a move to State College, Pennsylvania, Molly was actively involved in the school district, serving as president of the PTO, frequent library volunteer, kindergarten aide and frequent substitute. After a long period as a volunteer, Molly accepted a position in the computer technology program in the middle school. With her husband’s appointment as a dean at Penn State and the University of Texas at Austin, Molly became actively involved in student and alumni activities. More recently, Molly has become an avid quilter, adding to the family collection of quilts that now extends to four generations.