Home / The President / Past Presidents and First Ladies / Edward Conradi 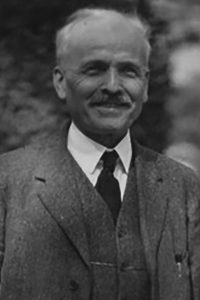 Dr. Conradi’s accomplishments were notable. By 1915 he had succeeded in developing a program that was recognized by the Southern Association of Colleges and Secondary Schools. In 1924 the institution was approved by the Association of American Universities. Each year of his administration, he added personnel and equipment to the growing institution. While serving as president Dr. Conradi taught FSCW’s first experimental psychology course.

Conradi, who was born in Ohio and earned a Ph.D. in psychology from Clark University in Indiana, was FSCW’s longest-serving president. His contributions resulted not only in his name being given to a Florida State University biology building but also to the College of Arts and Sciences’ first Endowed Chair in the Psychology Department in 1991.

Augusta Grothaus (1873 – 1928) studied fine arts at a convent school and taught public school in Ohio. She and Edward Conradi married in 1898. As First Lady, Mrs. Conradi took great interest in the students of Florida State College for Women. She was a charter member of the College Dames Club, established in 1926 to allow the wives of faculty and administrators to get to know one another and welcome newcomers to campus. The club established a fund for college seniors who needed financial assistance. Upon her death, the fund was named the Conradi Fund. The organization continues today as the Faculty and Friends Club and gives money to the Southern Scholarship Foundation rather than to individual students. Mrs. Conradi took an active role in the social affairs of Tallahassee and served as president of the Women’s Club. The theatre in the Williams Building was given her name because of her love and interest in the arts. The Conradi family included two daughters, Elizabeth and Louise.