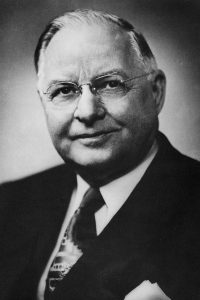 The change from a women’s school to a coeducational school in 1947 was a substantial one in the school’s history, and required great effort from the faculty and Campbell’s administration to carry out smoothly.

Dr. Campbell supported the creation of an intercollegiate sports program and worked to bring it along slowly but surely, paralleling the development of the new university. One of his most important contributions was his support for the construction of a football stadium on campus. His goal was achieved when the stadium was opened in 1950 and named for him. In 2004, the field was named after football coach Bobby Bowden, which made the official name of the facility Bobby Bowden Field at Doak. S. Campbell Stadium.

Dr. Campbell retired from his position in 1957, but remained in the Tallahassee area as President Emeritus until his death in 1973.

Edna Simmons (1897 – 1978) and Doak Sheridan Campbell were married in 1941, just two months before he was named President of Florida State College for Women, which became The Florida State University during his administration. She earned her B.S. from Peabody College in 1928 and her master’s degree from Peabody in 1932. Prior to marriage she served for many years as teacher, principal and supervisor in the Mississippi public schools, then as a member of faculty of Martha Washington College, Fredericksburg, Va. At the time of her marriage she was the director of the training school of Wilson Teachers College in Washington, DC. Capable, versatile and armed with her professional experience as educator and leader of professional associations, Mrs. Campbell fulfilled her responsibilities as the wife of a college president with insight and vigor. In 1948, when the McIntosh House was moved from downtown Tallahassee to the campus, she became the first President’s wife to live in an official Florida State University President’s House (now the Pearl Tyner Alumni Welcome Center). An enthusiastic gardener, she was responsible for the oldest trees and plants on the President’s House and Alumni Center property, which had been an open pasture, and she worked diligently on campus beautification. An avid athletic fan, especially of football and baseball, she was responsible for restoring an old athletic field to new use. Mrs. Campbell was active in the American Association of University Women and local church and garden clubs. She was a gracious hostess who was at her best welcoming students, faculty or legislators into the President’s home. She was so highly involved in President Campbell’s administration that she was sometimes referred to as Doak’s “unpaid consultant.”