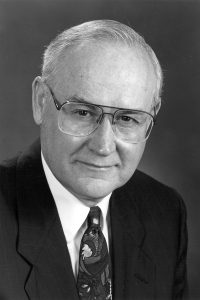 Dale W. Lick served as president of The Florida State University from 1991-1994. He also served as president of Georgia Southern University and the University of Maine. Since his term as Florida State University president he has been a professor of educational policy, and leadership studies and part of the university’s Learning Systems Institute. Lick has been a faculty member and educational administrator for 40 years, including faculty and administrative appointments at nine colleges and universities. He is the author or co-author of over 50 professional books, articles and proceedings.

Marilyn Kay (b. 1937) and Dale Lick began life together as hometown sweethearts and married on September 15, 1956, in Marlette, Michigan. Mrs. Lick attended college at St. Clair County Community College (Michigan), Riverside Community College (California), the University of California, Los Angeles, and Georgia Southern University. Mrs. Lick brought years of First Lady experience to Florida State, having served in that capacity at Georgia Southern College (now University) and the University of Maine. During the Licks’ time in the Presidents’ House, their daughter Diana was a graduate student in social work. Mrs. Lick was actively involved in numerous community endeavors, and one of her principal efforts was with her church, where she served over the years as an ordained minister as well as many other positions. With a deep belief in the worth and dignity of all people, Mrs. Lick opened the President’s House to everyone — students, faculty, staff and the community. With a lighthearted spirit and joie de vivre, Mrs. Lick took her First Lady responsibilities seriously and forthrightly, assisting the President and others in the full range of problems and opportunities that confront a major university and its community and friends.