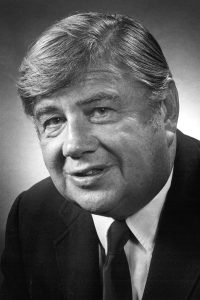 Bernie Sliger, a highly regarded economist, served as president of The Florida State University from 1977 to 1991 after four years as the university’s executive vice president and chief academic officer. He returned to the helm as interim president after his successor Dale Lick resigned in 1993. Sliger served in that capacity until Talbot “Sandy” D’Alemberte became president in 1994.

Sliger provided forward-thinking leadership during a long period of unprecedented growth for the university. During Sliger’s tenure, student enrollment increased by nearly one-third, the National High Magnetic Field Laboratory was awarded to the university, and the institution acquired three supercomputers.

Establishment of the FAMU/FSU College of Engineering was high on his list of major achievements, as was acquisition of the Panama City Campus. In addition, Florida State rose to the pinnacle of intercollegiate athletics and joined the Atlantic Coast Conference; funding was approved for the multimillion-dollar University Center; and the idea for the College of Medicine was first explored.

Following his retirement, Sliger served as the director of the Gus A. Stavros Center for the Advancement of Free Enterprise and Economic Education and as a professor of economics. He died in 2007.

Ruth Margareta “Greta” Taube Sliger (b. 1924) was raised in Newberry, Michigan. She attended Cleary University and Eastern Michigan University. She and Bernie Sliger married in 1945. In 1978 the Sligers moved into the President’s House (now the Pearl Tyner Alumni Welcome Center) with their two teenagers, Greta Lee and Sten, and lived there longer than any other first family. The President’s Ice Cream Social, now a venerable tradition that has moved from the President’s House to the campus, was born in 1980, the brainchild of President Sliger. Among President and Mrs. Sliger’s noted house guests were British Prime Minister Harold Wilson, Lillian Carter (mother of President Jimmy Carter), Andrews Sisters singer Patty Andrews, and Florida State alumni Robert Urich and Burt Reynolds. The Sligers enjoyed the grounds, maintaining a vegetable garden and a rose garden. Mrs. Sliger was honored for her loving and tireless support of the University with the 2006 Mores Torch Award, which honors respect for customs, character and tradition.