Home / The President / Past Presidents and First Ladies / Albert A. Murphree 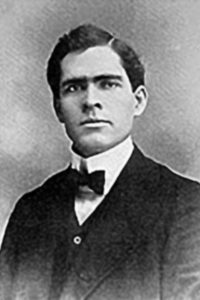 Albert A. Murphree, a mathematician who joined the faculty of the Seminary West of the Suwannee River in 1895 at age 25, was president during a time of reorganization of higher education in Florida, including the 1909 transition to the Florida State College for Women.

Despite the change to women-only status, Murphree had no intention of operating a typical women’s college. He aimed instead to create an “institution of higher learning whose students happened to be females,” and he succeeded in creating one of the top colleges in the South.

One of the college’s nearby historic residence halls, constructed in 1922, is named Jennie Murphree Hall, in honor of his wife.

Wife of President Albert A. Murphree

Jennie Henderson (1877 – 1921), a graduate of the Seminary West of the Suwannee River with a bachelor of letters, was the daughter of Col. John A. Henderson, a lawyer and railroad counsel who served as a trustee of the Seminary. Henderson introduced his daughter to young educator Albert A. Murphree. The two hit it off, and Murphree proposed during a buggy ride on Thanksgiving Day in 1896. The couple married in 1897, the year Murphree was selected as third President of the Seminary. The couple had five children, one of whom died young. Mrs. Murphree, who played the piano and who insisted that all her children learn to play various musical instruments, merged her love of music with her fondness for entertaining. In 1909, when Murphree became President of the University of Florida, the family moved to Gainesville. After Mrs. Murphree died suddenly in 1921, a Florida State College for Women dormitory was named in her honor. Residents of Jennie Murphree Hall were referred to as “Jennie Roses.” Her daughter, Martha, was a member of the FSCW Class of 1925.