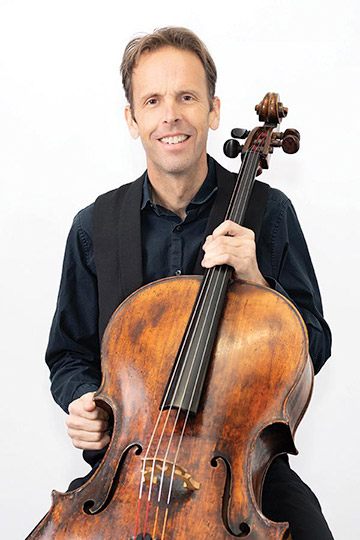 Professor of Cello Gregory Sauer joined the College of Music in 2006. A native of Davenport, Iowa, Gregory Sauer attended the Eastman School of Music and the New England Conservatory. His principal teachers included Ada Marie Snyder, Charles Wendt, Paul Katz, Laurence Lesser, Bonnie Hampton and Colin Carr. For eleven years prior to his arrival at FSU Mr. Sauer taught at the University of Oklahoma, where he was named Presidential Professor (2005).

Praised for his versatility, Mr. Sauer performs in many different musical arenas. He has appeared in recital at the Old First Concert Series in San Francisco, the Crocker Art Museum in Sacramento, the Brightmusic Concert Series in Oklahoma City, at universities and schools of music such as the Blair School of Music at Vanderbilt, the Shepherd School at Rice University, the University of Iowa and the University of Tennessee, among many others. Mr. Sauer was a prizewinner in the Hudson Valley Philharmonic and Ima Hogg National competitions and has performed concertos with the Hudson Valley Philharmonic, the Houston Symphony, the New American Chamber Orchestra, the Quad City Symphony, Oklahoma City Philharmonic, the Columbus (GA) Symphony, the Tallahassee Symphony, and the Missoula Symphony, among others.

Mr. Sauer joined the Carpe Diem String Quartet in 2019, playing concerts in Carnegie Hall’s Weill Recital Hall, Siena, Italy, and in the group’s first China tour. Along with his brother, Thomas Sauer, he serves as co-Artistic Director of Chamber Music Quad Cities in their hometown of Davenport, Iowa. Other chamber music ventures have resulted in appearances at the Austin Chamber Music Center, the Snake River Music Festival, the Victoria Bach Festival, the Texas Music Festival, the Colorado Music Festival, and the Garth Newel Music Center. As a member of the Fidelio Quartet, a prizewinning group in the London International String Quartet Competition, he performed concerts in the UK, Germany, Italy, and the Tanglewood and Aspen Music Festivals.