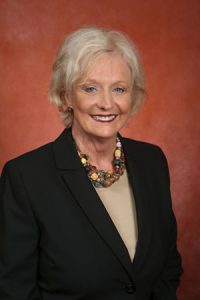 Jean Moore was born in Calhoun, Georgia, and moved as a young girl to Jacksonville, Florida, where she spent the remainder of her childhood.

She attended Brenau College in Gainesville, Georgia. During a summer break with college friends in Florida, she met John Thrasher and the two were married in 1964. Not long after college graduation and John’s commission in the U.S. Army, the young couple was posted to Germany. It was during this time their first child was born. John’s next assignment was duty in Vietnam and during his absence, Jean returned to the United States to reside near family in Orange Park, Florida. Here the couple’s second child was born. Upon John’s return from overseas, the family moved to Tallahassee so that he could enroll in Florida State University’s College of Law. Jean managed the “home front,” and completed their family with the birth of their third child.

After John’s graduation from FSU’s College of Law, the family moved to the Jacksonville region where Jean became heavily involved in the local community and was soon recognized as a community leader. She juggled Girl Scout troops, the PTA, youth sports leagues and served as a church deacon. Over the years, multiple boards benefited from her dedicated service, including the Lighthouse Learning Center in Clay County, Florida, and a local non-profit which raised one million dollars to build Quigley House – a center providing crisis intervention and temporary shelter for victims of domestic violence.

Jean was also a constant source of insight and support during John’s many years of legislative service and leadership.

With her husband’s selection as Florida State University’s 15th President, Jean has enthusiastically embraced the role of First Lady and on a daily basis participates in university activities supporting faculty, students and alumni in their goals and achievements.