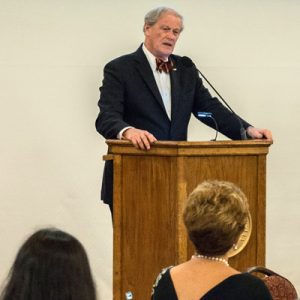 Good evening. It’s a joy to be here to celebrate the 15th anniversary of the Center for the Advancement of Human Rights and pay tribute to my dear friend, Sandy D’Alemberte.

I’ve known Sandy for a very long time. To give you an idea how long, when we met Nixon was still president — though he wouldn’t be for too much longer.

As Nixon was preparing to resign to avoid impeachment, here in Tallahassee Sandy was named special counsel to the select-House Committee on impeachment for the Florida Supreme Court.

I was a little more than a year out of law school in 1974 when I began working for Sandy on this issue. I was immediately struck by Sandy’s strong work ethic and his brilliant legal mind. He was really much the same then as he is today: A person of great integrity with an abiding sense of justice.

And, yes, he wore a bowtie even then.

Looking around this room, I see a lot of old friends, but I think Jean is the only person here who has known me longer than Sandy. Jean is the love of my life. She has always been my rock, and Sandy has been my inspiration.

Over the course of 40 years, Sandy and I have developed a strong friendship, which I guess surprises some people who see only our political differences.

But we care deeply about the same things. One of them, of course, is Florida State University. When Sandy was president and I was Speaker of the House, we had the opportunity to work on a number of things to benefit FSU.

One of our biggest wins was the establishment of the College of Medicine back in 2000. At that time, it had been more than 25 years since a new medical school had been established in the United States.

At one point, I didn’t think we had the votes needed to get the new school. I was ready to give up, but Sandy was just tenacious. When he puts his mind to something, he is going to win. He came up with the distributed model of medical education, and we got the legislation through.

I was honored when a building at the medical school was named for me. But it never seemed quite right that there was a Thrasher Building on this campus before there was a D’Alemberte Building.

I’m glad we can finally rectify that with the naming of the Sandy D’Alemberte Center for the Advancement of Human Rights. As with all things with Sandy, there is justice after all.

It’s also quite fitting that the Center has established the Robert Kerrigan Chair of Human Rights Advocacy. That’s because there wouldn’t be a human rights center without Bob.

As we now know, it was Bob’s vision and generous financial gift that led to the establishment of the nation’s first human rights center of its kind devoted to teaching, research, and most importantly, advocacy.

Bob didn’t want the kind of center where a bunch of lawyers would sit around talking. He envisioned a place that would engage students in doing hands-on work that would make a real difference.

For years, Bob has remained anonymous while continuing to support the Center with annual gifts to ensure that our students could keep up their advocacy work around the globe.

From combating human trafficking to aiding asylum seekers and helping torture victims, our students are standing up for the fundamental human rights of people in Florida and across the country and abroad.

I admire Bob so much for making this happen without any thought of ever receiving recognition for his generosity. But I’m glad that we can now publicly acknowledge and express our appreciation for all he has done — both for our students and the citizens of the world.

With Sandy’s stature in the international legal community and Bob behind the scenes, there was no doubt that the Center for the Advancement of Human Rights would be a success — and it has been.

Thanks to their deep knowledge and commitment to human rights and equal justice for all, FSU is recognized today as a leader in this area.

Over the past 15 years, the Center has worked with the Florida Legislature and the Attorney General’s Office, as well as federal government agencies, in crafting human-rights related laws and policies.

Untold victims of human trafficking, torture and war crimes in more than 90 countries, as well as those seeking asylum, have been aided by lawyers, staff and students at the Center.

This is all part of Sandy’s legacy. He believed that it is not enough simply to educate our students. He wanted them to become good citizens who contribute to society in meaningful ways.

He brought his passion for social justice, human rights and service to others to his role as president.

It’s really hard to have any criticisms of Sandy, but if I had to have one, it’s that he set the bar for an FSU president so high.

As president, he was dedicated to academic excellence and research, intellectual freedom, diversity, heritage and historic preservation, support for the arts and culture, championship athletics, civic responsibility and service, international programs and campus beautification. He was known for his tremendous integrity, broad vision and genuine warmth.

In the video we saw earlier, I said I wish I could be more like him. I can certainly try — I can even wear a bow tie like I am tonight — but there is only one Sandy. I am honored to call him my friend, and I applaud him tonight.

Congratulations, Sandy, Bob, Terry and everyone at the Center for a remarkable 15 years of fighting for freedom, justice and peace. You have made the world a better place for all of us. God bless you and the work that you do.